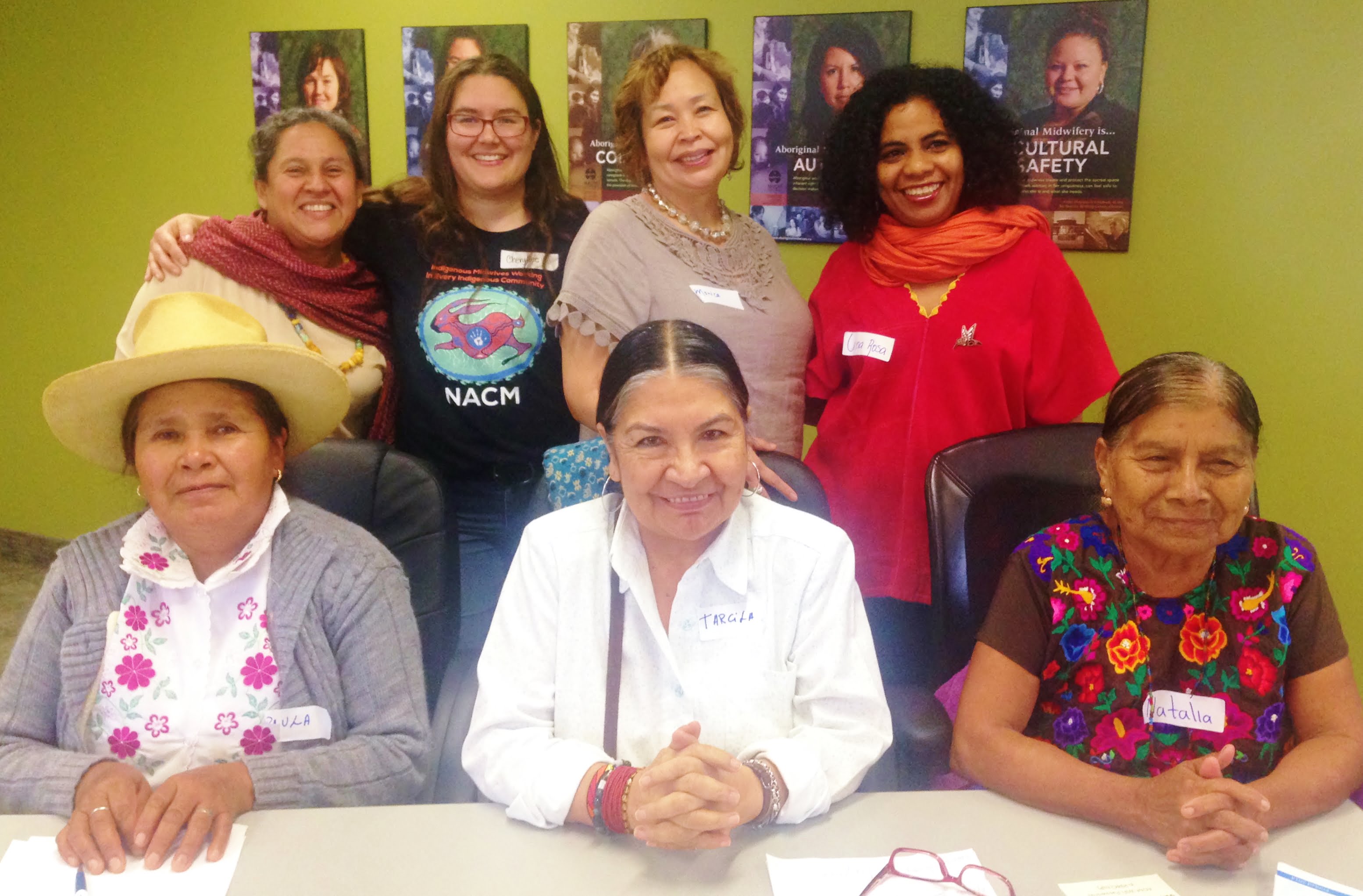 Indigenous midwives from Canada, Peru and Mexico gather in Toronto at the International Congress of Midwives.

In the remote Inuit community of Puvirnituq, Quebec, women in their 37th week of pregnancy used to have to fly to either Montreal or Moose Factory in order to receive care – in a foreign language and culture, and usually on their own. Not surprisingly, some women preferred to risk not travelling to the doctor so they could deliver their baby in the comfort and familiarity of their community.

But in 1986, a maternity department was opened in Puvirnituq at the Inuulitsivik Health Centre led by Indigenous midwives. Today, “the midwives’ practice is a model of integration of traditional knowledge and modern medicine,” according to the centre’s website. “Their practice and their formation have developed in order to meet the realities of families in the north, their cultural and community context, and the reality of health care in remote areas, within a multidisciplinary team.” Now, only women whose pregnancies are deemed high risk must travel to larger centres.

Indigenous midwives practise in Canada with the support of provincial or territorial midwife associations, delivering babies in women’s homes, birthing centres or hospitals, said Cheryllee Bourgeois, a Cree midwife and Director of Clinical and Professional Development at the Association of Ontario Midwives. “At Six Nations in Brantford, Ont., Indigenous midwives have been delivering babies for 20 years, and in Toronto, Seven Generations has been working for 10 years.” It is proven that when a woman gives birth within her cultural context, the outcomes for both mom and baby are better, she said.

Articles 11, 15, and 24 of the UN Declaration of the Rights of Indigenous People state Indigenous people shall receive health care in a way that they find suitable. “With few exceptions, modern midwifery as taught in Midwifery Education Schools has mostly overlooked Indigenous knowledge,” says Jose Zarate, Indigenous Communities and Latin American-Caribbean Development Program Coordinator for PWRDF. “Many Indigenous women continue to deliver their babies assisted by traditional birth attendants. The lack of recognition of Indigenous knowledge by formal health systems continues to alienate Indigenous pregnant women and contribute to on average high maternal and child mortality rates.”

So in 2017, PWRDF invested just over $100,000 in a new program linking Indigenous Midwives in Canada (Ryerson University’s Aboriginal Initiatives), Mexico (Kinal Antzetik) and Peru (CHIRAPAQ). The goal of the project is to use this integration and formalization of Indigenous knowledge in Canada with Western medicine as a model for Indigenous midwives in Mexico and Peru, where the “parteras” — or “she who gives life” — operate on the fringes, outside of the medical community.

At the 2017 ICM conference, representatives from all three partners introduced the project and discussed the role of the midwife. “Midwives are protectors of space, of families, of culture and of the next generation,” said Bourgeois, narrating a Powerpoint presentation. Midwives also preserve ceremony and cultural practices of birth, in such a way that culture becomes a protective element of health and a tool that “creates better outcomes.”

Yet, Bourgeois notes, Indigenous Midwives have many more skills to offer. “Indigenous midwives are not being used to their full potential and have skills that do not exist elsewhere in the health care system. Some examples include the work Indigenous midwives do to correctly position the baby throughout pregnancy and how it prevents many Cesareans; they also have the ability to reach and care for people who would otherwise receive no prenatal care – which clearly improves outcomes.” Bourgeois is providing advice to Ryerson University’s Aboriginal Initiatives in the implementation of the Indigenous maternal health program.

In the first year of the project, the Aboriginal Initiatives from Ryerson University carried out research about the midwifery role in the welfare of Indigenous communities in Canada. They also developed implementing strategies for Indigenous maternal health in the three countries as well as methodologies to train Indigenous midwives and promote recognition of knowledge and practices of Indigenous and traditional midwives for the benefits of Indigenous communities. They are currently developing strategies on how to promote Indigenous midwifery as a viable, available, efficient and legitimate response to the needs of intercultural maternal health.

Kinal Antzetik took the lead in setting up the Reference Group with the other two partners to ensure ongoing consultation as they coordinate project activities. They have organized a number of videoconferences on best practices of Indigenous midwifery and developed the theoretical framework for Mexico. They are also in the process of developing a questionnaire that will be used with Indigenous midwives in all project countries. Zarate recently visited several participating midwives groups in Mexico who are doing research on Indigenous midwives in Mexico and developing curriculum and training materials. Many midwives of Kinal were affected by the recent earthquake and PWRDF donated $10,000 to help with recovery costs. LINK

Ryerson University’s Aboriginal Initiatives developed and presented an Emergency Skills Knowledge Exchange workshop at the ICM (International Confederation of Midwifery) Congress in Toronto in June 2017. Eight Indigenous midwives from Central and South America and Indigenous women representatives from CHIRAPAQ and KINAL participated at this workshop on an exchange training/learning session where discussions revolved around emergency prevention. While some emergencies require hospital care, a trained midwife has experience handling a range of emergencies such as shoulder dystocia (when shoulders are stuck after head has been delivered), twins, breech, fetal malpresentation, abnormal fetal heart rate, cord prolapse, neonatal resuscitation, post-partum hemorrhage and cord around the neck. The training was the first step in developing a culturally appropriate emergency skills program to be shared by the three organizations.

Tarcila Rivera, a Peruvian Indigenous leader from CHIRAPAQ presenting in Toronto, shared her perspective at the Emergency Skills Workshop. “In Peru, midwives and doctors are sent to rural areas to impose their knowledge. It takes eight years of university study to become a midwife there, yet it is seen as a very low status job. There is persecution from doctors and a lot of unnecessary Cesarean sections.” The rates of C-sections in South America are among the highest in the world at 45% in 2014, according to United Nations figures. In 1990 it was 28%, higher than Canada’s current rate of 26%). “Ontario’s Indigenous midwives are a model for Peru. They are integrated with hospitals and doctors. They are respected.”