The P stands for Primate (the head of the Anglican Church of Canada) but it also stands for our partners in Canada and around the world, people-centred development and for the parish volunteers who engage Canadians with our partners’ work. Programs focus areas include Preventive Health, Food Security, Empowering Women, Indigenous Programs, Humanitarian Response and Accompanying Refugees.

Learn how you can get involved and support the work of PWRDF and our partners all over the world. Spread the good news of PWRDF, join webinars, volunteer, pray with us and learn about the different ways to give. You can donate online now by clicking here.

In March of this year, when there were indications of failed rains and increased hunger in East Africa, PWRDF drew funds from its own budget and announced an emergency fund to raise money for countries suffering from intensifying hunger and at a very serious risk of famine. Through the ACT Alliance, we acted quickly to fund relief projects in South Sudan, Kenya, Somalia and Ethiopia. We also funded relief efforts in Nigeria where Boko Haram has wreaked havoc and stolen lives, and where people’s livelihoods had been severely upended. In addition we withdrew funds from our Canadian Foodgrains Bank equity to support further food distribution programs in South Sudan.

By the end of May, PWRDF had allocated $338,600 to eight projects, with an additional allocation of $100,000 in August. Another project with Foodgrains Bank and ADRA South Sudan is set to begin September 1. We are also in consultation with ADRA Yemen as to how to contribute to the critical needs facing families there.

The interactive table below provides links to stories about several of our projects: 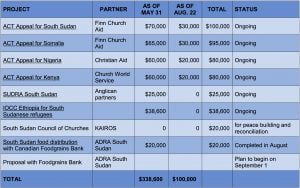 “I have seen how difficult it is, visiting with farmers in Kenya and Burundi whose fields have withered under a hot sun and few rains and whose wells have gone dry for the first time in their 70, even 80 years of memory,” says Will Postma, Executive Director of The Primate’s World Relief and Development Fund.

In May, the federal government announced a Famine Relief Fund with a 1:1 match, retroactive to March 17, running until June 30. At the end of the matching period, Anglicans across Canada had donated $379,000 to PWRDF. The federal government has since reported that $21.3 million was donated to the fund, with $11.5 million coming from 17 faith-based organizations.

The need continues and will continue for some time as communities struggle with conflict and extremely high numbers of refugees. To donate, click here.